On September 4, as part of the annual White Night contemporary culture forum, the Skaņu Mežs festival will host its traditional experimental music evening. The event will take place in the New Teika neighbourhood at a new event venue Fantadroms (Gustava Zemgala gatve 74a, 1st floor, Henrihs building). The event can only be attended by people, who are vaccinated and/or who have recovered from Covid-19, presenting a valid Covid-19 certificate and personal identity document at the entrance. Children up to 12 years of age will not be admitted to the event.

As it has often done before, Skaņu Mežs has decided to organise its White Night concert evening as a mini festival, that is, with as many different manifestations of music as possible, which embody the festival’s main objective: to present contemporary musical innovations and experiments. The audience will be able to enjoy ambient music inspired by metal, free improvisation and experimental pop music with laser performance elements. Several performances will feature newly designed instruments built by the musicians themselves.

Gischt is a solo project by Austrian musician Ursula Winterauer, which is stylistically based on a fusion of metal music and futuristic ambient music. Her instrumentation includes bass guitar and analogue synthesisers. Winterauer is also the co-founder of the highly acclaimed Austrian experimental music label Ventil Records.

Riccardo La Foresta is a young Italian musician, who has already performed with free improvisation greats such as John Butcher, Axel Dörner and Chris Corsano. La Foresta’s most interesting proposition is a self-modified instrument which he calls a drummophone. This is a set of drums combined with wind instrument elements and pneumatics. There are a lot of variations in La Foresta’s works.

For example, in one of them, two bass drums resonate with the help of compressors, which direct a flow of air onto them. Reviewing La Foresta’s most recent recording Drummophone, Philip Clark of The Wire magazine commented that, “La Foresta has pushed percussion music back into the realm of speculative improvisation.”

Kœnig is drummer and electronic musician Lukas Kœnig’s solo project, which audaciously combines drumming inspired by contemporary music and free improvisation with electronic music and manifestations of experimental contemporary pop music. During live performances he collaborates with laser artist BR-LASER (Bernhard Rasinger) and plays the drums, electric organ and electronic instruments. Among others, Kœnig has collaborated with singers Audrey Chen and Elvin Brandhi, as well as the prestigious contemporary music ensemble Klangforum Wien.

Arvydas Kazlauskas is a Lithuanian saxophonist residing in Latvia, who has become a notable personality in Latvia’s contemporary music scene. As a soloist Arvydas Kazlauskas has performed with the Latvian National Symphony Orchestra, Lithuanian State Symphony Orchestra, the State Chamber Orchestra Sinfonietta Rīga, the professional brass band Rīga and the Sinfonia Concertante orchestra. In addition, he has debuted compositions by Rolands Kronlaks, Andris Dzenītis and Linda Leimane. This year Kazlauskas’ most experimental work to date was published, the free improvisation album Purvs, which he recorded in collaboration with Lithuanian saxophonist Liudas Mockūnas.

To strengthen Kazlauskas’ ties to the free improvisation genre, Skaņu Mežs has invited him to perform a freely improvised duet concert with another musician, drummer Riccardo La Foresta.

Audrey Chen is an American-Chinese vocalist, electronic musician and improviser currently residing in Berlin. She has performed together with Elliott Sharp, Nate Wooley, Joe Mcphee and Tetuzi Akiyama. Born into a family of scientists, engineers and doctors, Chen became an exception to this tradition, choosing to study music. At the conservatory, she learned to play the cello and vocals, and specialised in ancient and contemporary music. Chen strives to develop a deeply personal style of improvisation in which all three instruments (cello, vocals and her self-built analogue synthesiser) play indivisible and equal roles, and can engage in abstract storytelling. 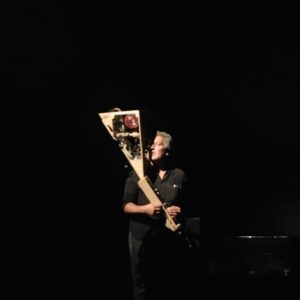 Semjons Haņins is a poet. He has published poetry in the Latvian and Russian press since the late 1990s, and has been a member of the Russian poets’ text group Orbīta since 1999. His most recent volume of poetry is the 2019 publication ne tā (not like that).

This devices has been designed as an extension of the body with percussions, which reverberate to the rhythm of the reading of text. These texts find echoes in the sound of the disharmonious but at the same time rhythmic khapone, which was designed with input from scenographer Rūdolfs Bekičs, musician Aleksandrs Aleksandrovs (Nikto) and designer Rolands Peterkops (MAREUNROL’S).

The idea of this instrument, which is seemingly an extension of bodily percussion, occurred to Semjons Haņins over a decade ago and evolved out of his ruminations about the plastic nature of poetry. The idea was that movement to the rhythm of articulated words directly impacts percussions arranged on the body. During the “empty” year of 2020, the designers found themselves with time on their hands in which to execute this idea, and did so with support from the SCCF (State Culture Capital Foundation). It took about six months for the team to design the prototypes followed by the instrument itself.

The event’s supporters are Riga Council and the Trust for Mutual Understanding.